What is No-Code Automation?

What is Automation Testing?

Automation Testing is a method of using an automation tool to execute the test case suite. The automation software can also enter test data into the System Under Test, compare expected and actual results and generate detailed test reports. Testing and Quality Assurance are the fundamental processes in software development. If the bugs are not detected early, it can get hard to fix resulting in the delay of the product delivery. So, testing needs to be proactive and this requires testing and re-testing whenever even the smallest change is made to the underlying code. As a software evolves, the need for repeated testing mounts. This is where Test Automation comes to the rescue. We can design and implement a test case once and run it whenever required. This saves time and money. It also vastly increases the test coverage and improves accuracy.

No-Code Automation is a new approach by creating automation tests which allows you to test an application without writing a single piece code or script. The aim is to make the setup so easy to use so that automating a test scenario takes less time and require almost no coding efforts. For many tasks, especially in IT automation, lesser the code, easier it is. The user can achieve a faster time to results and greater simplicity just by using and reusing premade or preprogrammed blocks of activities.

There are multiple approaches behind no-code testing. The most prominent one involves recording manual tests and playing it back and creating structured test flow diagrams that are used to run tests. The record and play approach being the most popular one right now and especially favored by web-based products.

The idea behind the approach is that a tester manually performs a test, which the tool records click by click. The tool then creates scripts to automate the test itself. The testers can also edit the scripts, and the testing process to best suite their requirements.

How does No-Code Automation Work?

No-code testing tools provide a user-friendly GUI to the users and let the users record the test steps. This makes automating any test scenario very easy and less time consuming as you need not code from scratch for each test scenario. No-code automation functions very similarly to enterprise codeless platforms. Both take complex tasks traditionally achieved by coding and simplify them through automated code generation.

So how does no-code automation work? Even if you call it no code automation, it is not ‘codeless’. It just implies you need not write code. In fact, while you record the test steps, the automation tool generates the code in the background which required to drive test automation. So, the automation tools provide you with an abstraction layer, which translates simple user interactions to code. Thus, you can focus on creating test scenarios and evaluating the user experience of your website rather than struggling with the creation of the ‘chunks of code’ to test.

Some no-code automation still leverages record and playback, but unlike legacy tools that record “static” test cases, and which are prone to break upon any minor change in the app or element within the app, codeless tools are equipped with machine learning and AI capabilities which allow test reusability, provide stability, and call for near-zero test maintenance.

Newly developed no-code automation tools leverage a modern UI to record stable test scenarios with support for key features like data-driven testing, test assertions and more. In addition, they introduce the concept of a “self-healing” mechanism, which can dynamically detect UI changes in an app, and modify elements on the fly, without needing to change anything in the pre-recorded test.

Code-less automation testing tools are a perfect solution for both automation and manual testers to speed up their work. These tools have taken over the market owing to their ease-of-use and speed. Code-less test automation is particularly useful when it comes to agile software development process.

No-Code test automation offers several benefits. Some of them are: 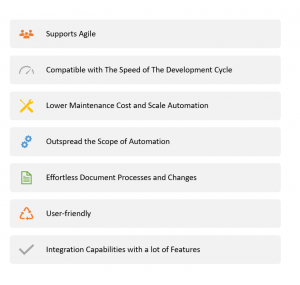 There are a lot of changes in the testing world in the past few years- with new innovations on the technologies used. Automation tools have become smarter and even employ Artificial Intelligence for smart testing. There are many tools available in the market that aims to simplify the testing process and allow users to create test scenarios without any coding skills and still ensure maximum test coverage. Here is the list of the leading ‘No-Code Automation’ tools in the market.

TestCraft: It is a selenium based codeless test automation platform ideal for regression and continuous testing. The tool comes with AI powered mechanisms for auto fix and maintenance of tests by automatically updating changes in the application during run time.

CloudQA: CloudQA is another popular automation tool which has an intuitive interface for codeless testing. It leverages record and playback tool and a feature rich SaaS platform. CloudQA has extended its capabilities to perform a wide range of tests for a single test case including synthetic monitoring, load testing and more.

Browsee: Browsee is also a ‘codeless automation testing tool’. In Browsee, the tool identifies issues or bugs immediately as when a user encounters an issue. It monitors your real user experiences and reports to you whenever there is an issue. All you need to do is just add a JavaScript snippet on your web pages. The tool takes care of monitoring the user experience.

Testim.io: Testim.io leverages machine learning for the authoring, execution and maintenance of automated test cases. It uses dynamic locators and learn with every execution. The outcome is super fast authoring and stable tests that learn, thus eliminating the need to continually maintain tests with every code change.