Unit testing is a way of testing individual units or components of a software. Unit testing basically involves breaking your program into individual pieces and subjecting each piece to a series of tests. a unit test is a method that instantiates a small portion of our application and verifies its behaviour independently from other parts. Tests are run periodically and also after a change is made to the source code to verify the functionality.

Typical unit test contains 3 phases: First, it initializes a small piece of an application it wants to test (also known as the system under test, or SUT), then it applies some stimulus to the system under test (usually by calling a method on it), and finally, it observes the resulting behaviour. If the observed behaviour is consistent with the expectations, the unit test passes, otherwise, it fails, indicating that there is a problem somewhere in the system under test. 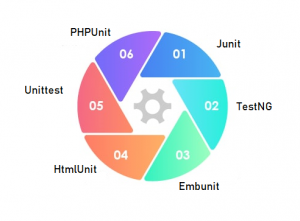 JUnit is an open-source unit testing framework for a test-driven development environment. This framework is specifically designed for Java programming language

TestNG is an open-source automation testing framework specifically designed for Java Programming language. TestNG resembles JUnit but offers some new functionality like concurrent testing to make it powerful and easier to use.

HtmlUnit is an open-source unit testing framework that supports JavaScript and it provides GUI features like forms, links, tables, etc. It offers an open-source Java library which contains GUI-less browser for Java programs.

The Python unit testing framework is a Python language version of JUnit,

PHPUnit is a unit testing tool for PHP programmer. It takes small portions of code which is called units and test each of them separately.

At Brainbox, we have developed a Test Automation Framework for end to end application testing of web and mobile android platforms. You can find the details about the framework here https://www.brainbox.consulting/blogs-news/software-testing-blog/brainbox-test-automation-framework/.

The framework is developed using Python as programming language. Hence we have adopted Unittest feature of Python to do unit testing. We have divided our framework libraries into smaller components and unit testing is implemented for each component and its methods to make sure every functionality of the framework works as expected.

We have made use of setUp() method that is available in Unittest framework, which the testing framework will automatically call for us when we run the test. The prerequisites needed to run a particular component is setup in this method and then the test runs for that component. We run the unit tests periodically and also after making changes to the code to verify everything is working properly.

Below are the things that are covered in unit testing of our framework,

1. Ensure Unit Tests are independent of each other:

2. Always stick to one code unit at once:

When testing a unit of code, though it relates to multiple use cases, unit testers have to test each use case in different test cases. This will effectively simplify the teams to do code changes or refactoring.

3. Make use of AAA for readability:

AAA stands for Arrange, Act, and Assert. This pattern helps in separating what is being tested from the “arrange” and “assert” steps; thus reduces the inter-mix of the assertions with the help of the “Act”. Thus, the test cases are more readable.

4. Fix the bugs before moving for Integration Testing:

5. Ensure to have proper variable naming:

In unit testing, one of the important and best practices is to have proper naming of the variables. Therefore, avoid using magic strings, and also follow clear and consistent naming conventions.

While performing unit testing, make sure that the test code is not deployed with the source code in your build script.

Google is one of a third-party vendor on our site. It also uses cookies, known as DART cookies, to serve ads to our site visitors based upon their visit to www.website.com and other sites on the internet. However, visitors may choose to decline the use of DART cookies by visiting the Google ad and content network Privacy Policy at the following URL – https://policies.google.com/technologies/ads
Necessary Always Enabled
Privacy Policies You may consult this list to find the Privacy Policy for each of the advertising partners of https://www.brainbox.consulting/. Third-party ad servers or ad networks uses technologies like cookies, JavaScript, or Web Beacons that are used in their respective advertisements and links that appear on https://www.brainbox.consulting/, which are sent directly to users' browser. They automatically receive your IP address when this occurs. These technologies are used to measure the effectiveness of their advertising campaigns and/or to personalize the advertising content that you see on websites that you visit. Note that https://www.brainbox.consulting/ has no access to or control over these cookies that are used by third-party advertisers. Third Party Privacy Policies https://www.brainbox.consulting/'s Privacy Policy does not apply to other advertisers or websites. Thus, we are advising you to consult the respective Privacy Policies of these third-party ad servers for more detailed information. It may include their practices and instructions about how to opt-out of certain options. You may find a complete list of these Privacy Policies and their links here: Privacy Policy Links. You can choose to disable cookies through your individual browser options. To know more detailed information about cookie management with specific web browsers, it can be found at the browsers' respective websites. What Are Cookies?
SAVE & ACCEPT