The terms Test Automation and Robotic Process Automation (RPA) are the two common terms within the field of software automation. They look identical as they both contain ‘Automation’ and offer the same features of reducing manual tasks. But these two are not the same as another. We will see in this article how they both are different even though they have some similarities. Let’s get started with their definitions:

What is Test Automation?

Test Automation is a method in software engineering that execute the test cases with the help of an automation tool. It further compares the actual results with the predicted ones. Test Automation helps developers and testers save time and increase test coverage by automating repetitive test cases. Test teams can reduce manual test efforts and eliminate bottlenecks. It is an important stage of a development process that is used to add additional testing that may be difficult to perform manually. 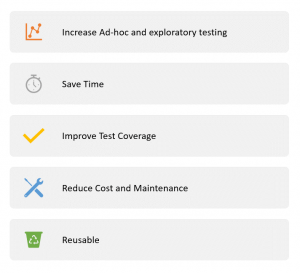 What is Robotic Process Automation (RPA)?

Robotic Process Automation or RPA is a term for a piece of software, or a ‘robot’, which carries out tasks and activities within systems, or applications, in the same way a human would. The term “Robotic Process Automation” imply visions of physical robots wandering around offices performing human tasks, the term really means automation of service tasks that were previously performed by humans. RPA is a practice of automating the business processes using software robots.

To get a brief idea on RPA and RPA tools, have a look at the article https://www.brainbox.consulting/blogs-news/software-testing-blog/robotic-process-automation/ . 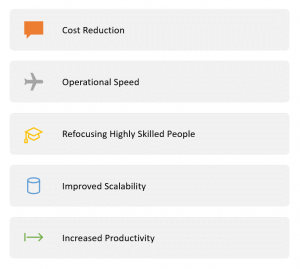 Difference between Test Automation and RPA

Test automation is solely used for testing. Its main purpose is to check and verify if a software or hardware is working as it is intended to and to make sure there are no bugs and failures in an application’s operation.

One of the main differences between Test Automation and RPA is the System under Test (SUT). Test automation can be applied only to a single software, application or product and its features.

RPA can be applied to the product as well as other business processes. RPA flows can run through different applications simultaneously.

Test automation can execute only what is coded in it. It just follows what it is instructed to do to test the System Under Test and does not do anything more.

Recent RPA tools use Artificial Intelligence (AI) technology that learn from human interaction with applications and imitate the same, improving the efficiency of process by learning from it.

While performing Test Automation, it is very important for testers to have domain knowledge of application or System Under Test. This is needed to define efficient test scenarios and create test cases that can then be automated.

Traditional test automation requires knowledge of at least one programming language to automate test cases. Although now, there is more use of codeless and low code automation tools in the market, there is still coding involved in most of the automation tools.

RPA tools mostly use tools that have drag and drop features which are intuitive in nature. RPA allows user to automate processes through visual interface and it then generates the code accordingly. This makes programming knowledge not necessary to automate using RPA.

It may seem like we can use Test Automation tools for RPA as well. But as we saw in earlier points, even though they may seem similar, there are different tools available for Test Automation and RPA.

RPA tools use intuitive automation that takes user inputs through visual interface. UiPath and iRPA of SAP are two examples of RPA tools. It is not possible to automate business processes using Selenium.

There are multiple tools for test automation depending on what you are testing. Selenium is an important tool to test web applications.

As we have seen in the article, Robotic Process Automation does look a lot like Test Automation. Yet they are not the same. The main difference being RPA is used to automate business processes and Test Automation is used to test an application, software, or a product. They both hold their own ground in their respective fields. The similarity is, both Test Automation and RPA help in increasing efficiency for an organization.